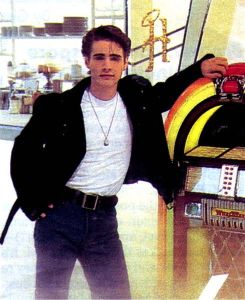 On April 24, 1989, the serial Teen Angel premiered on the 1989 reboot of the Mickey Mouse Club. Similar to the serials of the original program (such as Annette and Spin and Marty), this was a limited serial that aired only twelve episodes. It told the story of Buzz Gunderson, who had been killed in a car crash in 1959 and brought back as a guardian angel. Buzz is tasked to help hapless Dennis Mullen through various tasks that, when completed, will allow him to get into heaven. The series starred Jason Priestly as Buzz, Adam Biesk as Dennis Mullen, and Renee O’Connor as Nancy Nichols. The series was popular enough to warrant a sequel serial called Teen Angel Returns.