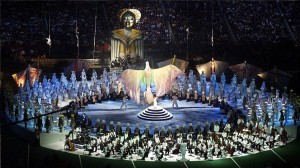 “Put your hand on the future, share a dream together around the world.”

On January 30, 2000, Super Bowl XXXIV was held at the Georgia Dome in Atlanta, Georgia, between the St. Louis Rams and the Tennessee Titans. The halftime show at this game was produced by Disney and was titled “Tapestry of Nations,” based on the then-running Epcot parade and inspired by Disney’s millennial celebrations. Several prominent performers were on hand, including Tina Turner, Christina Aguilera, Enrique Iglesias, Phil Collins, and Toni Braxton; there was also an 80-person choir, a full symphony orchestra, and a narration by Edward James Olmos.