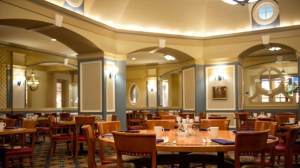 On January 1, 2008, the Captain’s Grille opened in Walt Disney World’s Yacht Club Resort, replacing the Yacht Club Galley. The restaurant’s theme matched that of the Yacht Club Resort, specializing in classic seafood dishes. It served breakfast, lunch, and dinner, with dishes ranging from smoked salmon on a toasted bagel, New England-style lobster roll, and buttermilk fried rock shrimp. The restaurant closed on May 24, 2017, and the area was turned into the Ale & Compass Restaurant on November 4, 2017.