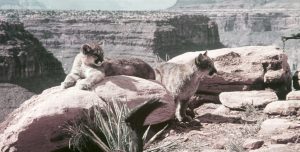 On December 17, 1958, the CinemaScope featurette Grand Canyon premiered in theaters; it would later be released alongside Sleeping Beauty. Grand Canyon was similar in style to the True-Life Adventure documentaries but had a twist: the film had no narration, but was set against the “Grand Canyon Suite” by Ferde Grofé. The featurette would go on to win the Academy Award for Best Live-Action Short Subject.