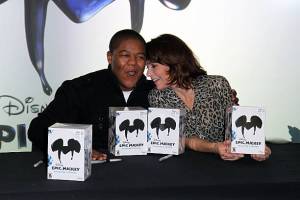 “The ballroom posed some difficult challenges for Jennifer, but similar to Mickey, she rose above them and came out a hero.”

On November 30, 2010, recent Dancing with the Stars contestants Kyle Massey and winner Jennifer Grey were on hand to celebrate the release of the new Epic Mickey video game at the Disney Store in Times Square. The pair were on hand when the store opened at 7:00 AM to meet fans for a handshake and photo, and provide copies of the new game. Massey is known as a Disney Channel star, having worked on popular shows such as That’s So Raven and Corey in the House. Grey is an actress, known for her roles in Ferris Bueller’s Day Off and Dirty Dancing. Guests were also able to meet game designer Warren Spector, and those that waited in the early hours were kept warm with special Mickey Mouse gloves and ears, as well as given breakfast from Epic Mickey-themed food trucks.