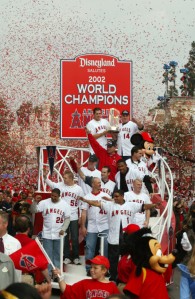 “The event was a home run for Angels fans of all ages.”

On October 29, 2002, Disneyland celebrated the Anaheim Angels’ first World Series championship win with a special parade running through the park. The parade featured the team; Jackie Autry, the widow of the team’s founder Gene Autry; Angels manager Mike Scioscia; and, of course, the World Series trophy. The parade traveled between Disneyland and Disney California Adventure, and was accompanied by a special dance party and a fireworks show.