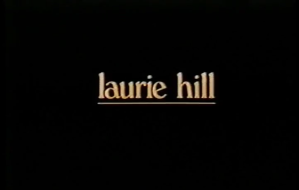 On October 28, 1992, the final episode of the ABC television sitcom Laurie Hill aired before the series was cancelled. Created by Neal Marlens and Carol Black, the series centered around pediatrician Laurie Hill, who was fiercely dedicated to her work and her family, and trying to balance the expectations and demands of both. Unfortunately, the series never seemed to take off on the network, and was cancelled after only five episodes of the ten episode order had aired, leaving the rest of the season still unaired as of 2018. The series was notable for being one of the earliest roles of Ellen DeGeneres, who would go on to have her own successful show by the same creators, starting in 1994. The series starred DeLane Matthews as Dr. Laurie Hill, Robert Clohessy as Jeff Hill, Eric Lloyd as Leo Hill, Ellen DeGeneres as Nancy MacIntyre, Kurt Fuller as Dr. Spencer Kramer, Joseph Maher as Dr. Walter Wiseman, and Doris Belack as Beverly Fielder.