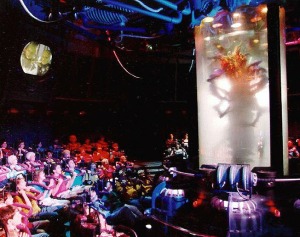 “A world with so many eager customers is always worth our greatest effort.”

On October 11, 2003, the ExtraTERRORestrial Alien Encounter attraction officially closed in Walt Disney World’s Magic Kingdom. A joint attraction between Disney and George Lucas that opened on June 20, 1995, it featured the story of an alien that was accidentally transported into the X-S Tech laboratory. A dark sci-fi themed interactive sensory adventure, it featured binaural sound and other effects to enhance what came to be known as a “4D” experience. The attraction was replaced with Stitch’s Great Escape!, which used a majority of ExtraTERRORestrial Alien Encounter’s technology.