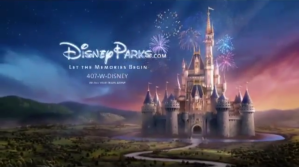 “Has a moment ever hugged you and never let go?’

On September 23, 2010, Disney Parks’ newest campaign, entitled “Let the Memories Begin” began running. Guests were encouraged to share their experiences and memories of time at a Disney Park, which were used in a variety of media sources, including print ads, television promotions, and a website dedicated to the campaign. The campaign ended in 2011.