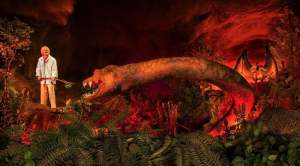 On September 15, 1996, the attraction Ellen’s Energy Adventure opened in Epcot’s Universe of Energy. Originally replacing the Universe of Energy attraction, this updated attraction featured Ellen DeGeneres, Bill Nye “The Science Guy,” Jamie Lee Curtis, Alex Trebek, and Johnny Gilbert, teaching guests about how energy is produced, the current sources of energy, and the search for new, renewable sources of energy. Guests sit in a special seating area and watch a series of films, as well as an audio-animatronic diorama featuring a primeval world; the seating sections split apart at this point to move through the diorama before reassembling for the final two films. The attraction was closed on August 13, 2017, to make way for a new Guardians of the Galaxy themed attraction.