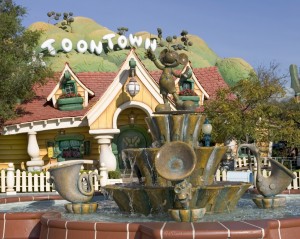 On July 10, 1993, the television special Disneyland Presents Tales of Toontown premiered on television, distributed by Disney and ABC Domestic Television. The feature was used to promote the newest land in Disneyland, which opened on January 24, 1993. The hour-long special featured Jerry Hawkins as detective Spence Dempsey, who is brought to Toontown by his pal Goofy to discover the cause of the craziness occurring there. Written by Wayne A. Brown, Lisa Cappel, and Robin Mensinger, it starred Ray Johnson as the Gatekeeper, Steve Glaudini as the Toon Docotr, Dave Burkhart as the Planning Commissioner, Wayne Allwine as Mickey Mouse, Tony Anselmo as Donald Duck, and Bill Farmer as Goofy. It was directed by Bruce Stuart Greenberg.