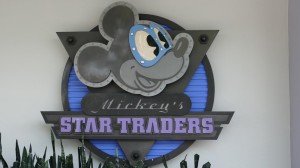 “Journey with Mickey to the future for a cosmos of character goods at one of the largest shops at Magic Kingdom park.”

On June 28, 1991, the merchandise shop Mickey’s Star Traders opened in Walt Disney World. Located in Tomorrowland, the store replaced the former Mickey’s Mart. It is one of the largest merchandise stores within Magic Kingdom, and features a variety of merchandise ranging from the Star Wars franchise, to characters from classic Disney film characters.