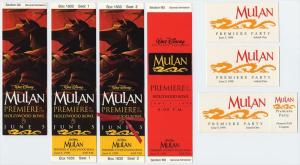 “We wanted to get the message of the movie out there first, before you start selling it as an ancillary product.” – Disney Feature Animation President Peter Schneider

On June 5, 1998, Disney’s newest animated feature film Mulan premiered at the Hollywood Bowl in California. The premiere had little fanfare compared to past animated features Pocahontas, which premiered in Central Park, and The Hunchback of Notre Dame, which had a parade in New Orleans. The cast of the film, including Ming-Na Wen (voice of Mulan) and George Takei (voice of First Ancestor), as well as pop band 98 Degrees, were on hand for the film premiere.