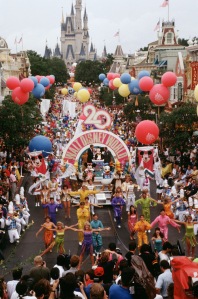 “Beginning in September 1991, Magic Kingdom Park kicked off its 20th anniversary celebration early with the debut of a new parade – the “Surprise Celebration Parade.”

On June 4, 1994, the Surprise Celebration Parade had its final run in Walt Disney World’s Magic Kingdom Park. Beginning on September 22, 1991, the parade was created to celebrate the park’s 20th anniversary. It was based on the Party Gras Parade that was held exclusively in Disneyland, with several of the floats being repurposed for the Walt Disney World parade. The parade featured 35 to 40 feet balloons of several popular characters, including Roger Rabbit, Goofy, and, of course, Mickey Mouse. It was preceded by Mickey Mania.