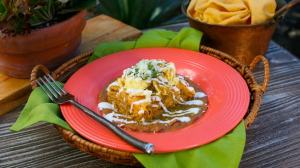 “Round up all your amigos and head to the hacienda for classic Mexican cuisine on a bonita bougainvillea-shaded patio.”

On February 6, 2001, the Mexican restaurant Rancho del Zocalo opened in Disneyland’s Frontierland. It opened on the site of the former Casa Mexicana, and offered a menu with Mexican and barbecue courses. However, in 2004, the menu changed to an all-Mexican offering, featuring dishes such as Chilaquiles, Chile Verde, and Burrito Guadalajara.