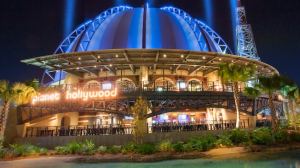 On January 27, 2017, the Hollywood-themed restaurant Planet Hollywood reopened in Disney Springs. Originally opening in Walt Disney World’s Pleasure Island on December 18, 1994, it was structured to resemble an observatory. The renovated flagship store features four stories, along with a stargazing observatory and an outdoor terrace. A new menu was created by celebrity chef Guy Fieri, featuring decadent desserts and over-the-top burgers.