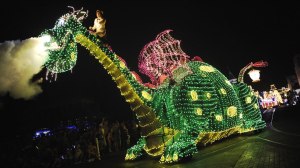 “Join us in January as we welcome the Main Street Electrical Parade home to Disneyland park for a limited time!”

On January 20, 2017, the Main Street Electrical Parade began a limited engagement run in Disneyland. Originally premiering on June 17, 1972, the floats and synthesizer music became a huge hit with park guests. A version of the parade was created for Walt Disney World, which premiered on June 11, 1977. The Disneyland version ended its run on November 25, 1996. With the limited engagement version, special merchandise and food offerings were offered to help guests enjoy the experience.