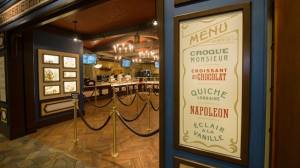 “Sample delectable treats and tempting delicacies at this traditional French bakery – from soups and salads to fresh baguette sandwiches and pastries.”

On January 10, 2014, the new Les Halles Boulangerie & Patisserie opened in Ecpot’s France Pavilion. Previously known as Boulangerie Patisserie, the quick service restaurant serves a variety of French delicacies, ranging from sandwiches, to quiche, to pastries. The original pastry shop had needed an overhaul, as the French pastries had such a good reputation that there wasn’t enough room to accommodate all the guests.