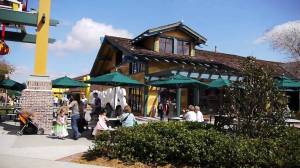 On January 8, 1998, McDonald’s opened its first restaurant on a Disney property, opening in Walt Disney World’s Downtown Disney. Disney had partnered with McDonald’s for several years at the time of its opening, with the children’s meals featuring toys promoting the upcoming Disney animated features and series. Before the restaurant, kiosks featuring the restaurant’s famous fries were placed within Walt Disney World’s Magic Kingdom Park and Disneyland Park. The restaurant was closed in 2004, as part of the end of Disney’s exclusive partnership with the fast food chain.