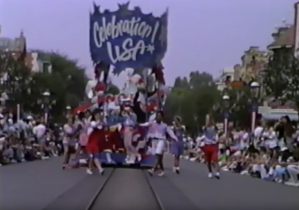 “Do you feel the spirit that’s on the street in America today?”

On November 24, 1991, the daytime parade Celebration U.S.A. ended its run in Disneyland. Preceded by the Party Gras Parade, the Celebration U.S.A. parade was a humorous display of life in America while also celebrating patriotism and America’s diversity. The parade began on June 21, 1991, and was succeeded by the Livin’ in the USA Parade.