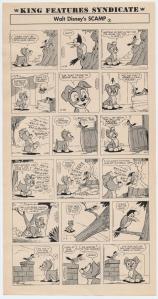 On October 31, 1955, the first Scamp daily comic was published. Scamp was the offspring of the characters Lady and Tramp from the animated feature film Lady and the Tramp, and began being featured in the Treasury of Classic Tales Lady and the Tramp comic starting July 10; it was soon decided that Scamp was popular enough to lead his own daily comic. The comic was drawn by Dick Moores, with Ward Greene, script writer for the animated film and author of the short story “Happy Dan, The Whistling Dog” on which the film was based, providing the text and story. Greene would also go on to write a novelization of the film that was released two years before the film was released. The Scamp comic would run until June 19, 1988.