August 7, 1992 – The Short Film Petal to the Metal is Released to Theaters 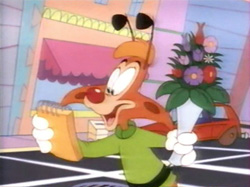 On August 7, 1992, the special short film Petal to the Metal premiered in theaters before the feature film 3 Ninjas. The short featured the character of Bonkers D. Bobcat, before he starred in his television show in 1993. It finds Bonkers, in an effort to keep his job, trying to deliver a bouquet to Fawn Deer in only five minutes, but ends up in one hilarious predicament after another. The short was directed by David Block.