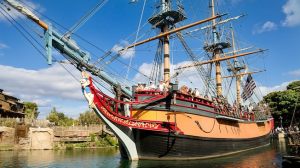 “Sail boldly forth into the wilderness on a full-scale replica of a majestic 3-masted ship from the 18th century.”

On June 14, 1958, the Columbia Sailing Ship attraction opened in Disneyland’s Frontierland. Based on the original ship that circumnavigated the globe in 1787, the ship was meticulously designed to be extremely accurate to the time, and includes several displays that portray life for sailors in the 18th century. The ship sails in the Rivers of America, circling the Pirate’s Lair on Tom Sawyer Island.