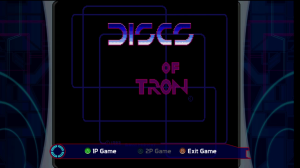 “Discs of Tron is considered an arcade classic as it mesmerized fans who wanted an entertaining and challenging experience derived from the innovative film.”

On February 13, 2008, the video game Discs of Tron was released on the Xbox LIVE Marketplace. The game, available for the Xbox 360 platform, was based on the classic arcade game released in 1983. The game has players facing off against the villain of the film Tron, Sark; players must “derezz” him in each level of the game using special disks. The game has been upgraded from the original, but allows players to also play the version from 1983.