November 23, 1951 – The Goofy Short Film No Smoking is Released to Theaters 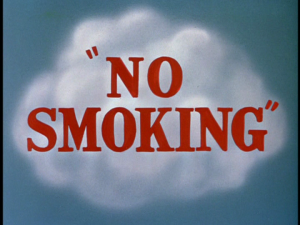 “Smoking became a new habit in the old world.”

On November 23, 1951, the Goofy short film No Smoking was released to theaters. It was directed by Jack Kinney, with story by Milt Schaffer and Dick Kinney.

The story begins with the history of smoking, beginning with the time of Columbus, and going through the ages. However, modern smoker George Geef has made it a rather filthy habit, with cigarette butts strewn everywhere and a cloud of smoke constantly around him. His schedule revolves around when to have his next cigarette, but Geef is also plagued by irritated eyes, coughing, and wheezing. He finally resolves to quit, only he finds it a bit tougher than he thought. He battles himself with his habit, finding temptation everywhere. He starts to go mad with the need for a smoke, but can find no relief. He finally gets a cigar, but it explodes in his face.