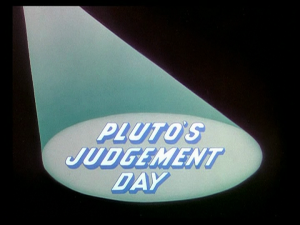 “Always chasing cats, aren’t ya? Well, you’re gonna have plenty to answer for on your judgement day!”

On August 31, 1935, the Mickey Mouse short film Pluto’s Judgement Day was released to theaters. It was directed by Dave Hand.

The short begins with Pluto chasing a kitten around the yard until it jumps inside the house. The chase creates a huge mess, and Mickey chastises the pup. Pluto angrily lies down in front of the fire and starts to nap while Mickey cleans up the frightened kitten. Pluto then dreams that a cat has come to the door to call him out for a challenge, and Dream Pluto heads out, though Dream Mickey attempts to stop him. Pluto is led to a special cat cavern, where he is taken deep below and decried as Public Enemy No. 1. He is sentenced for his crimes against all cats, with the judge, jury, and all present all cats, with a wink to the audience that justice certainly is not on Pluto’s side. Each witness is brought in, with one crime more horrific than the next. The jury deliberates for one second before they deliver a guilty verdict for Pluto, and the cats carry him out to his punishment of being held over a fire. Pluto is woken up by a stray piece of coal from the fire, and lands in the tub, splashing Mickey and the kitten. Although initially frightened of the kitten, Mickey convinces the pair to kiss and make up.