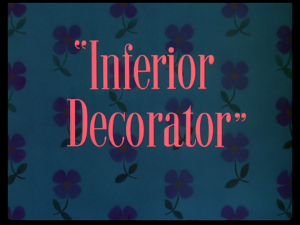 On August 27, 1948, the Donald Duck short film Inferior Decorator was released to theaters. It was directed by Jack Hannah, with story by Lee Morehouse and Bob Moore.

Spike the Bee is buzzing happily amongst the flowers, when he hears a horrible singing inside the huse. He sees Donald plastering some flower wallpaper and, thinking that these are real flowers, he runs into the wall. Donald, observing Spike, plays a cruel prank on the bee, capturing him in a bucket of wallpaper paste. Spike tries to escape, and Donald cuts the paste that is attached to Spike, sending him hurtling into the ceiling. Donald sends the dizzy bee outside, but Spike angrily makes his way back in tries to sting Donald’s tail, but gets caught on the sticky wallpaper. As Donald tries to shake Spike off, he gets the wallpaper and himself stuck on the ceiling, leaving himself open for Spike’s attack. Donald is able to dodge the attack with a well-placed cork, but Spike is able to free himself and once again ready himself for a sting. Spike calls in reinforcements from his hive, and they all go sting Donald one by one.