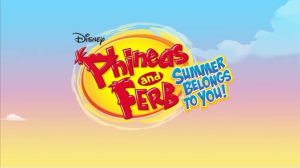 “By busting the boys, I’d be busting myself?”

On August 2, 2010, the special episode of the hit animated series Phineas and Ferb, entitled “Phineas and Ferb: Summer Belongs to You,” premiered on Disney X D. This episode was the first one-hour long special for the show, and had almost 4 million viewers on its premiere date. The episode then premiered on the Disney Channel four days later. It was directed by Robert F. Hughes and Dan Povenmire.

The episode begins with Candace calling her boyfriend Jeremy, who is vacationing in Paris. Candace hangs up because Phineas and Ferb’s robot creation is jumping rope in the backyard. In true fashion, the robot disappears when their mother arrives home. Phineas realizes that the summer is half over, and they need a real challenge. Candace is left in charge of the boys while their parents head out of town for two days. Meanwhile, Professor Doofenschmirtz is taking his daughter to Vanessa to Tokyo, though he has an ulterior motive in going to Japan. The next morning, Phineas reveals his plans to take the longest day of the summer and make it even longer: he and Ferb have created a rocket that will fly all the way around the world, following the sun, therefore making it the longest day ever. Buford is unconvinced that this could possibly be done, and bets the two that they can’t do it. Should they lose, they have to announce to everyone that they are governed by the laws of physics, summer’s not whatever they make of it, and they can’t do anything else the rest of the summer. Stunt singers Clay Aiken and Shaka Khan appears to sing a song rousing support for Phineas’ mission. 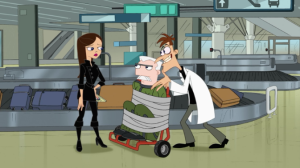 Perry heads down to his secret lair to get his assignment: Dr. Doofenshmirtz is off to Tokyo where the annual Good Guy Convention is being held, with Major Monogram as the keynote speaker. Meanwhile, Stacy is helping Candace through her worries that Jeremy might be seeing other girls while in Paris. Candace reveals that she and Jeremy aren’t officially “boyfriend and girlfriend” yet, and Stacy advises Candace to just call Jeremy her boyfriend first. In Tokyo, Doofenshmirtz has already captured Major Monogram and has taken him with him on vacation, much to Vanessa’s annoyance. Phineas and Ferb sets up their flight, and Candace, while originally wanting to bust the boys, decides to go because they will be heading to Paris. The group heads to Tokyo, where Doofenshmirtz has set up a giant water balloon to fall over the Good Guy Convention, with Monogram to get the blame. The plane crashes in Tokyo, where Stacy’s family has been waiting for them. They help them refuel with a musical number and head off, accidentally catching Vanessa as they go. Vanessa, who had decided to leave her dad and head to Paris on her own, was thrown from the Tokyo Tower by her father’s water balloon crashing into her. Vanessa decides to join Phineas and Ferb. Doofenshmirtz decides to go after them, begging for Monogram and Perry’s help to do so.

The boys’ plane crashes in the Himalayas, as they didn’t account for the weight of an extra person. Luckily, Baljeet’s uncle lives nearby, where he has set up a rubber-making factory. The group is able to borrow some of the rubber, and manage to make it out after a slight mishap. The group bounces around the world thanks to the rubber ball they’ve constructed. The rubber ball deconstructs by the time they reach Paris, so the group stops to get fuel and parts. The group splits up, and Candace finds Jeremy with a group of teenagers, and worries that Jeremy has found another girlfriend. Isabella tries to make her outing with Phineas romantic, but Phineas is more distracted by looking for parts for his plane. Doofenshmirtz arrives in Paris to take Vanessa back, and decides to go after listening to some advice from Ferb. Isabella and Candace are both despondent about their ruined romantic prospects. While Phineas cheers Candace up, Jeremy arrives, and Candace decides to tell him how she feels. Jeremy calls her his girlfriend, and the two establish their relationship. 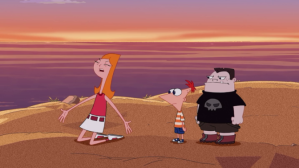 The group then sets off home, and are close to making it home, when the rocket completely disintegrates, leaving the group stranded on a deserted island. Candace despairs as she thinks romance is dead, and Buford brags that Phineas and Ferb will lose. Phineas tries to come up with a plan to leave, but realizes that he doesn’t have anything with which they can create anything. Isabella cries as she feels ignored by Phineas, who is frantically trying to come up with a plan. Finally, Isabella gives Phineas the self-esteem boost he needs, and he uses the map to create a special paper airplane to fly the group back home. Candace argues that the plan won’t fly, but the group convinces her to believe thanks to the lure of Jeremy. The group manages to arrive back in Danville, and are able to make it back to the backyard after Buford gives the group their bikes back. The group arrives home to a welcome home party in the backyard, and a musical number.