December 25, 1953 – The Goofy Short Film How to Sleep is Released to Theaters 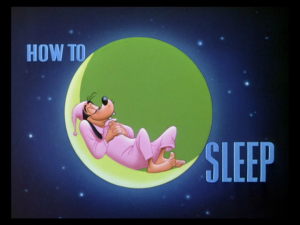 “Since the beginning of time, man has always had the problem of sleeping.”

On December 25, 1953, the Goofy short film How to Sleep was released to theaters. It was directed by Jack Kinney, with story by Milt Schaffer and Nick George.

The short begins with the history of sleep – or, rather, the lack of it. For present day, they observe various ways people try to go to sleep, from being walked to being rocked. More and more people seem to have difficulty trying to sleep due to the demands of their day. The short then goes into various methods to help people sleep, including hot milk and opening a window. As Goofy tries to count sheep, this only makes his situation much worse. He then has to go see a scientist to help him find the best way to sleep using a variety of electronic devices all at the same time. Unfortunately, his dreams continue to keep him awake. In conclusion, the only way science has determined to put Goofy to sleep is to use a giant mallet over the head, effectively knocking him out.