November 16, 1990 – The Animated Featurette The Prince and the Pauper is Released to Theaters 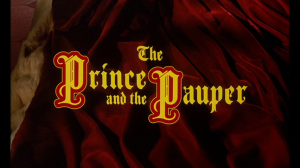 “You needn’t worry about that. To govern, you need to say only one of two things: ‘That’s a splendid idea, I’m glad I thought of it,’ and ‘Guards, seize him!’”

On November 16, 1990, the animated featurette The Prince and the Pauper was released to theaters alongside The Rescuers Down Under. It was based on the classic novel of the same name by Mark Twain. It was directed by George Scribner, with screenplay by Gerrit Graham, Samuel Graham, and Chris Hubbell. It features the voices of Wayne Allwine as Mickey and the Prince, Bill Farmer as Goofy, Arthur Burghardt as Captain Pete, and Tony Anselmo as Donald.

The story begins in England, where times are hard after the good King fell ill and his Captain of the Guard terrorized the people in the King’s name. Mickey Mouse is seen selling kindling in the snow, while Goofy tries to sell snow cones. Mickey cheers Goofy and Pluto up with a song about the life they’ll live one day, just like a king. The Captain passes by with his carriage of drunk soldiers, and Pluto follow after them, spying some food. The door to the castle closes before Mickey can retrieve Pluto, and when he tries to get Pluto back, the guard mistakes Mickey for the Prince and quickly ushers him inside. Inside the castle, the Prince is having his lessons, but yearns to play outside in the snow, and plays pranks on his assistant Donald. The Prince spies the Captain hurting Mickey and Pluto, and orders that Mickey be brought to him at once; the Captain then throws Pluto outside. 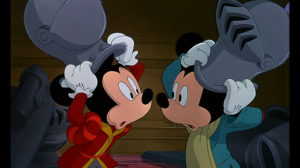 Mickey and the Prince have their first meeting, and are surprised at their similarities

After Mickey accidentally knocks down some suits of armor, he and the Prince come face-to-face, and are shocked at how they look so much alike. The Prince thanks Mickey for “saving his life” of boredom, and asks Mickey to switch lives with him. Mickey is reluctant, but the Prince promises to be back as quickly as possible, and takes a special ring with him to prove he is the Prince, in case he should get into any trouble. As the Prince passes by the Captain, the Captain treats him horribly, giving the Prince the first taste of the cruelty his people have endured. He runs into Pluto outside, but Pluto soon realizes that it isn’t Mickey. Mickey soon meets Goofy, but Goofy doesn’t seem to be fazed by ‘Mickey’s’ strange behavior. The two begin the charade with mixed results.

The Prince sees the guards acting cruelly in the King’s name, and demands that they leave the people alone, but all they do is mock him. The Prince decides to reveal his identity to give the food back to the people, but when the guards find him, they decide to arrest him instead. The Prince is able to give them the slip, thanks to the “help” of Goofy, and the Captain is less than pleased when he hears what happens. Unfortunately for Mickey, the King is close to death, and wishes to see his son. Mickey goes in to see the King, and hears the man’s dying wish: rule the land from his heart, justly and wisely. Not knowing what else to do, Mickey promises to do so as the King dies. After he leaves the room, the Captain captures Mickey, and threatens to hurt Pluto if Mickey doesn’t follow his commands. The Prince hears the news as he stays with Goofy, and is heartbroken. He decides to head back to the castle to right the wrongs he’s seen. However, he is captured by the Captain and the guards before he can head back to the palace.

The Captain throws the Prince into the dungeon with Donald right before the coronation, and the plan that he will take over once Mickey is crowned. Mickey, however, does not want to enter the ceretmony, but is “convinced” by Pete holding up Pluto. While the Prince waits, the executioner appears, although it’s Goofy in disguise, and he helps break them out. They manage to outrun the guards, and make it to the coronation just in the nick of time. The Prince does battle with the Captain, with Pluto, Goofy, and Donald helping to fight the guards off. The Captain and his guards end up thrown out a window, and the Prince is crowned the King of England, much to the joy of the subjects. Mickey, Goofy, and Pluto are made the companions of the Prince, and rules with justice and compassion for all.