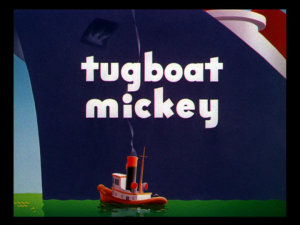 On April 26, 1940, the Mickey Mouse short film Tugboat Mickey was released to theaters. This is one of several shorts where characters Donald Duck and Goofy were teamed up with Mickey to create a more entertaining story. The short was directed by Clyde Geronimi.

Mickey, Donald, and Goofy are cleaning their tugboat while singing sea shanties, with Mickey being hoisted to the top of the mast to varnish. His bucket of varnish, however, is accidentally swallowed by a sleepy pelican, who becomes drunk on its contents. As Mickey battles the pelican, an announcement is heard over their radio that the steamship Gigantic is sinking, and Mickey scrambles to get his crew moving to rescue the ship. Donald and Goofy quickly start the ship, although they soon run out of steam. Goofy tries to shovel coal into the boiler, but the door continuously shuts on him, sending the coal flying back in his face. Donald then breaks the pulley, and when he tries to reassemble it, he is mocked by the steam. The pulley catches on to Donald’s hat, but when he tries to retrieve it, the steam completely fills up the hat and explodes on Donald. 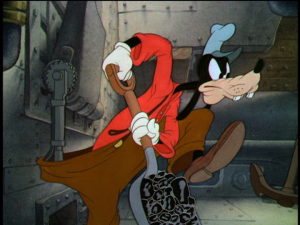 Goofy fights the boiler, unaware that he is caught on the lever for the coal release

Mickey continues to listen to the distress signal, and calls down to Goofy for more steam. Goofy attempts to take a running start to shove the coal in the boiler, but doesn’t realize that he caught his pants on a lever that released all the coal into his pants. The coal and Goofy go flying into the boiler, and when Goofy lights a match to see where he is, he is shot out by an explosion, followed by a steady stream of flames. Goofy shuts the boiler with an anchor, and a steady stream of steam is sent flowing through the mechanics of the ship. The pulley that Donald was trying to fix fixes itself – unfortunately, it traps Donald through his shirt, and Donald is knocked around as the steam makes the tugboat work on overdrive. Mickey tries to steer the tugboat, but it seems to have a mind of its own, and the boiler explodes, leaving this ship as nothing more than a wreckage. The distress call continues, until it is cut off by a radio announcer saying that they’d just heard the final broadcast in a radio drama about the Steamship Gigantica. Angered, Mickey, Donald, and Goofy drown the radio in the ocean.