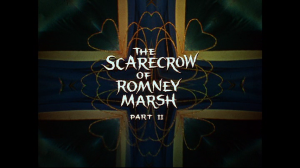 “Mutiny among the Scarecrow’s men is a worse danger than the soldiers are.

On February 16, 1964, the Wonderful World of Color Disney anthology episode premiered with the second part of the three-part dramatic story of The Scarecrow of Romney Marsh. It was based on the Christopher Syn stories by Russell Thorndike and William Buchanan. Teleplay was done by Robert Westerby, and it was directed by James Neilson. It stars Patrick McGoohan as Dr. Syn/The Scarecrow, George Cole as Mr. Mipps, Michael Hordern as Thomas Bates, Geoffrey Keen as General Pugh, Patrick Wymark as Joseph Ransley, Alan Dobie as Mr. Frank Fragg, Eric Flynn as Lt. Philip Brackenbury, and Sean Scully as John Bates.

After a brief introduction by Walt, the story continues where Part I left off (please see 2013’s February 9th entry for more information). General Pugh is burning houses to the ground looking for the Scarecrow, angering Squire Thomas Banks, as the houses on his land are being burned, with those citizens being terrorized. Pugh strikes a deal with Banks for information: he wants the names of those who couldn’t pay their rent, then inexplicably had the money to pay. Banks gives him the name of one individual, a fellow by the name of Ransley, whom he calls a difficult fellow. Banks arranges to meet with Ransley the next morning, and Ransley arrives to meet Pugh. John intercepts Ransley’s arrival, and once he shows Ransley to the meeting room, he listens in at the door. Pugh questions Ransley, wondering how he was able to pay six months back rent and keep paying rent though his crops are poor and his flock of sheep is dwindling. Pugh accuses Ransley of being a smuggler, but Ransley denies it. Pugh threatens Ransley with jail unless he tells Pugh everything about the Scarecrow and his smuggling ring. To save himself, Ransley offers to find out information that will lead to the Scarecrow’s arrest. Pugh gives him 48 hours, or he will be sent to jail. 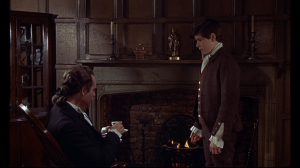 John, having heard all this, rushes off to tell Syn. One traitor, he warns, is enough to get them all hanged. Syn thinks on this, as there is a shipment coming in the next day. Syn does decide that it’s too dangerous for John to ride the next evening, as Pugh is staying at his house, but he is to keep his eyes and ears open for any more information. Syn heads to Ransley’s farm to see how the man is doing, and greets Ransley’s ill mother for a start, and finds that Ransley doesn’t take care of his family. She tells him that she’s grateful to the Scarecrow for saving them, but that Joe, who she knows is one of the Scarecrow’s smugglers, would betray the Scarecrow to save himself. As she and her grandsons are afraid of Ransley, she says they have no choice but to obey him no matter what he decides. She is sent upstairs by Ransley, and Syn talks with Ransley about the Scarecrow. Ransley things that Scarecrow’s men won’t betray him due to fear, but without the fear, they’d gladly betray him. As Syn leaves, he stays in the doorway to hear Ransley’s plans, and secretly follows him and his sons to the Oast house up Knoll Hill. Syn discovers that after Ransley gets his share of the contraband the next night, they’ll take it and leave.

After talking with John and Mipps, Syn decides that the only option is to make an example of Ransley to the other men in his outfit, as mutiny among the men is worse than anything they could imagine. He then pulls John aside to put in place the next part of the plan. Back at the Banks house, Kate Banks talks with Brackenbury, but is soon called away by John, who tells Brackenbury that he overheard a group of smugglers talking about a shipment of brandy coming in, being taken up to the old Oast house on Knoll Hill. John plants the idea in Brackenbury’s head that this is the perfect chance to catch some of the Scarecrow’s men. Brackenbury, who has been dreaming of a chance to prove himself, decides not to tell Pugh and handle this matter himself. 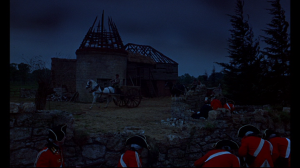 Ransley arrives at the Oast house, unaware of the troops waiting to arrest him

The night of the shipment arrives, and Scarecrow and his men are at their work, with Scarecrow giving out his orders. Ransley soon starts on his betrayal, smiling to himself after the Scarecrow rides off with his right hand man Hellspite. Ransley arrives at Oates house, unaware that Brackenbury and his men are waiting for him. Ransley decides to run for it, but is shot in the shoulder and captured by the king’s men. He is soon taken to court with his sons, and are told that they will not hang them if they confess the name of the Scarecrow. Syn arrives to watch the proceedings, and interrupts with a note that was left at his door: “If the Reverend Dr. Syn speaks for the prisoners on trial, he will answer to the Scarecrow with his own life.” Pugh questions why Syn would receive such a note, and Syn says that he had told Mipps about a point of law concerning this case, which was probably spread by Mipps at the inn. Banks allows the point of law to be heard, and Syn points out that, if the Scarecrow had known about the betrayal, he wouldn’t have wasted twenty kegs of expensive contraband. The kegs are examined and, finding that they contain nothing more than sea water, Ransley and his sons are free to go. Ransley thanks Syn, but Syn warns him that he should get away as far as he can. Pugh then threatens Ransley that he needs to provide proof by that evening, or he will be thrown in jail.

Mipps is sent to watch the prosecutor Fragg, as Syn is suspicious of him. As Fragg enters the inn, a tense silence falls. Mipps starts a conversation with Fragg, telling him that he knows everything about everyone in town and, as a member of the church, is the soul of discretion. Fragg takes the bait, and starts asking Mipps about Ransley. He asks Mipps for a horse that night, with no one knowing about it, and Mipps promises to have it for him at the fork in the sea road. Fragg shows up at Ransley’s and wishes to talk with him, with Mipps and John sneaking in to listen. Fragg offers to help Ransley, so long as Ransley offers to help him. Ransley wants to run, but Fragg offers to help Ransley and give him all the reward money if Ransley gives the names of the men in the Scarecrow’s gang, the signal system, and hiding places for the loot. Ransley, feeling cornered, decides to help Fragg. John and Mipps rush off to tell Syn of this new development. Fragg heads off to talk to Pugh, telling him that he’ll smash the Scarecrow’s gang, although he will need Pugh’s men at standby to protect him. Pugh agrees, but still insults Fragg in the process. Syn knows that Ransley will betray him, and decides to use Ransley as an example once more to those who would not only betray him, but those men who offer blood money for betrayal. 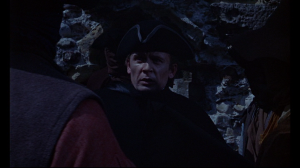 Pugh and his men wait at the old monastery, where Fragg asked them to wait, while Fragg waits at the old castle for Ransley. Fragg is ambushed by the Scarecrow and his men, and is captured. Ransley and Fragg are taken to an old barn with the Scarecrow conducting court. Ransley is charged with treachery, with Curlew and Hellspite providing testimony. Ransley’s pockets are emptied, and the list is found, damning Ransley. He is sentenced to hang, and Fragg is forced to watch as the man is hung. Frightened, Fragg flees, and the Scarecrow lets him go. After the men leave, it is revealed that the Scarecrow didn’t really hang Ransley, but tied the rope to a bit of the chair to make Ransley pass out. The Scarecrow tells him that Ransley is dead, and so he must flee and begin a new life, for if his men find that he is alive, they really will kill him. Ransley runs, and Mipps laughs at the ruse they have done. The next morning, a burial service is held for Ransley, and Fragg, on his way back to London, sees the sign stating “Here lies Joseph Ransley, departed this world as the result of an accident, May 17, 1775.” Pugh arrives and tells Syn to leave space in the graveyard for the Scarecrow, and Syn just smiles and tells Pugh to take care of that cold he’s caught.