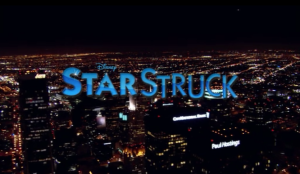 “Oh, you know exactly what you’re doing! In fact, I bet you do it all the time. You give girls that…that look and expect them to fall for you. Well, it’s not working with me, so get over it!”

On February 14, 2010, the Disney Channel Original Movie StarStruck premiered. The premiere had 6 million viewers, and became the Disney Channel’s most-watched original movie premier in the month of February. The movie was directed by Michael Grossman, with story by Barbara Johns. It starred Sterling Knight as Christopher Wilde, Danielle Campbell as Jessica Olson, Brandon Mychal Smith as Stubby, Maggie Castle as Sara, and Chelsea Staub as Alexis.

The film begins with pop star Christopher Wilde giving a performance at the Staples Center to an adoring crowd. In Michigan, fan Sara Olson is watching the concert on television, although her sister Jessica can’t understand her sister’s obsession with the pop star. As the family prepares a trip to California, Sara thinks that Christopher wants to meet her, and Jessica doesn’t want to go thanks to her sister’s obsession. Christopher goes out to party in California with his best friend Stubby, and meets up with his girlfriend Alexis, who gladly poses for the paparazzi. The next morning, Christopher has a meeting a movie producer for a new film role that could really help his career, although the producer thinks that Christopher needs to prove that he’s a serious, committed actor. He needs to keep his face out of the tabloids over the weekend, and the role will be his.

Sara is ecstatic about the opportunity to meet Christopher Wilde, while Jessica is less than thrilled

The family arrives in California, and Sara convinces her parents that she wants to take Jessica sightseeing, although her real intention is to stalk Christopher Wilde. She finds out that he’s singing at Alexis Bender’s birthday party, and plans to go, but Jessica has to go with her. Jessica only agrees when Sara promises to never talk about Christopher again. They head to the party, and Christopher tries to sneak in without being spotted by the paparazzi, as he promised Alexis he’d sing at her party. Seeing that he’s arrived at the club, Sara manages to sneak inside, as does Christopher, while Jessica waits reluctantly in the car. At midnight, Jessica finally gets annoyed with waiting and decides to go after her sister, and goes down the back alley to find her. As she reaches the stage door, Christopher accidentally hits her with the door as he rushes out. As he begins to panic, he takes her with him to the emergency room to get her checked out, as she appears to have a concussion.

At the hospital, Jessica is declared fine, with every test coming back normal. Jessica is left alone with Christopher, and she is not happy about it. He then has to rush home to meet his parents and the producer, and takes Jessica with him. Jessica is furious with the situation, and the two argue constantly. She is taken to his parents’ party, and he hides her upstairs while he talks with the party guests. He performs a new song at the party, and as Jessica overhears it, she is rather impressed with his talent. After he sings, he is alarmed to see that she has snuck out into the garage. He then takes her home, although once again they bicker the entire time. She lets him know point-blank that she’s not a fan of his, and he is intrigued by this. When they arrive at Jessica’s grandmother’s house, he realizes that the paparazzi have followed him, and she begrudgingly allows him to hide in the garage for the night when he offers her $5,000. The two almost have a moment, but Jessica tells him to stop giving her that look, and runs out, intriguing him more. 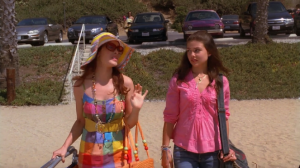 Sara and Jessica are sent by their parents to the beach, where Sara keeps her hopes up for a Wilde sighting

The next morning, Jessica is sitting down to have breakfast with her family, when Jessica has to prevent Sara from finding Christopher in the garage. Fortunately, he has already left the garage before he is discovered. Jessica’s grandmother tells them that there’s a story on Christopher on the news, and the gossip reporter states that, after his surprise appearance at the club, he was seen with a different girl later at his house, who may be stealing his heart. Jessica is mortified at this report, calling it slander, although the family has no idea as to why. Jessica and Sara are sent to the beach by their parents, and Jessica is annoyed that Sara is still on the search for Christopher, and stumbles upon him sitting in a chair, sleeping. He explains that he couldn’t go home because of the paparazzi camped outside his house, and Jessica agrees to lend him their car so he can get back. As the paparazzi arrives to find him, he takes her in her grandmother’s car, hitting her in the face in the process. The pair manage to sneak out undetected, and he offers to take her around LA for her troubles.

After a day of exploring, the pair end up lost on a dirt road as they try to avoid the paparazzi, and start bickering again. As they argue, they find themselves stuck in a mud pit, and have to get out of the car to push. The car sinks completely into the mud as they climb out, leaving them stranded in the middle of nowhere. The two have to walk back to the beach, and Jessica is furious, to say the least. Back at the beach, Sara finds the bar that has been left for her, which is Christopher Wilde’s car. As Jessica and Christopher walk, he is concerned as to why she’s so angry. She continues to argue with him, and he explains that he’s done nothing but think about her for two days. He thinks that she likes him, and she lets him have it, telling him that his life isn’t real. He can’t say anything against her accusations, but the two suddenly start playing around in a swamp pond when he tries to lighten the mood. As they dry off, he admits that he wants to stay there where no one can find him, as everybody just wants something from him. She asks him what he really wants to do, and he says that since he doesn’t want to disappoint his fans, he can’t say no. He then says he can be himself around her, and he likes it a lot. She then says that she likes it too. Reluctantly, they realize they have to leave, and he takes her hand as they head out.

Sara ends up at Christopher’s house, which means Christopher, and Jessica, are missing

Sara shows up at Christopher’s house with his car, and Stubby realizes that this is not a good thing. Jessica and Christopher finally end up at the beach, and he lets her know that she’s different from everyone he’s ever known, and the two lean in for a kiss, but he stops when he hears some people, thinking it’s the paparazzi. He then tells her that what’s between them ends on the beach, as she can’t tell anyone about their day together. If they get photographed together, he explains, it will get crazy, and he won’t get the movie deal, as she’s just an ordinary girl. This offends her, and she walks away. He offends her further by asking for her camera. He gives her cab fare, and he tells her that he doesn’t want it to end like this, but Jessica’s too hurt to care. After she heads into a phone booth to call for a cab, she spots him being accosted by fans and starts to cry. Unbeknownst to both of them, a member of the paparazzi catches the entire thing on film. As Christopher gets back to work, Stubby notices him viewing photos of his day with Jessica, and Christopher admits that he can’t get her out of her mind. Alexis stops by the studio, and she tells him she can’t understand why he would pick someone not famous before breaking up with him.

Jessica and her family prepare to go home, and her grandmother gives her some good advice before heading out: life has a way of working itself out. Christopher then has a meeting with the producer again, who has found out about Jessica from the tabloid reporters. He tells him that if he wants the movie deal, he needs to make Jessica go away. In a press interview, he claims that she’s just a fan that’s been following him around. Jessica sees the interview, and she’s even more heartbroken. Fed up, Jessica steps outside and confronts the paparazzi, and calls them out on their actions. Christopher watches the interview with Stubby, and Stubby is furious that Christopher has been saying “I don’t have a choice” about everything in his life lately. Taking Stubby’s words to heart, Christopher then shows up to the movie producer’s set, and refuses the offer for the film, not wanting to get it if he has to lie. He then tells his parents that he doesn’t want to do the movie, and wants to start managing his own life, effectively firing them as his managers. Back in Michigan, Jessica overhears Sara’s friend calling Jessica pathetic for making up a story about meeting Christopher Wilde, and Sara throws her friend out for being an idiot. Sara then comforts Jessica, inviting her to the dance with her.

After all of the events, Sara takes Jessica to the dance to cheer her up

The two head to the dance, and Jessica thanks Sara for her help, although Sara reverts back to her normal self and has Jessica pretend she doesn’t know her. Jessica is mocked by some student, when the lights go out. In a surprise move, Christopher shows up on stage and calls out Jessica’s name. He then sings a new song as an apology, but she doesn’t feel that it’s enough. The paparazzi shows up, and he admits on camera that he was the one who lied, and admits that he’s crazy about her. Jessica forgives him, and he sends the paparazzi away. Christopher finally meets Sara, and he asks her to go out with him on a real date. She agrees, and the two dance together.