January 28, 1932 – The Mickey Mouse Short Film The Duck Hunt is Released to Theaters 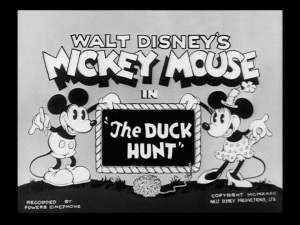 On January 28, the Mickey Mouse short film The Duck Hunt was released to theaters. It was directed by Burt Gillett.

Mickey and Pluto are out duck hunting in the woods, and all the ducks are playing in a nearby pond. When they hear Mickey’s whistling nearby, the quickly disguise themselves in the pond, leading Mickey to believe there are no ducks around. Mickey then calls Pluto over, but when Pluto shows up covered in mud and jumps on him, Mickey gets angry and orders Pluto to sit, then stand. Mickey is then amused that Pluto is able to walk on two legs, and whistles Yankee Doodle Dandy while Pluto marches like a soldier. Mickey then marches with Pluto right behind him, and Pluto is followed by a swarm of marching fleas. The fleas attract the ducks, who march out of the water and quack in time with the song while trying to eat the fleas. Mickey soon spots the ducks, the ducks fly away as Mickey chases after them.

Pluto hides in the pond with his disguise, hoping to lure enough ducks for Mickey to hunt

Pluto wears a wooden duck on his head and hides in the water to attract the ducks while Mickey watches from the reeds. Unfortunately, Mickey sneezes, giving up the ruse, and the ducks fly away. One duck returns to flirt with Pluto’s fake duck, and as Mickey takes aim, he realizes his gun isn’t working. As he checks it, the gun fires while pointed at the air, shooting off a tree branch that damages the gun, making the barrel point down. Mickey fires again, this time shooting a hole through his boat. As the boat sinks, Mickey calls out for help, and shoots the gun again, this time with the barrel flying off and landing on Pluto, destroying his outfit. The ducks then band together to attack the pair, picking Pluto up by the ears and taking him off into the air. Mickey grabs on to Pluto’s tail to pull him down, but he is no match for the ducks. They finally let Mickey and Pluto fall to the ground, landing in some long underwear left out on a laundry line.