December 19, 1962 – The Special Short Film A Symposium on Popular Songs is Released to Theaters 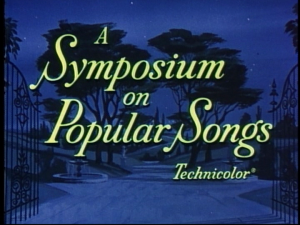 “Come in and sit down and I’m going to play for you several hundred of the latest hit songs of the past 60 years, which, naturally, I wrote myself.”

On December 19, 1962, the special short film A Symposium on Popular Songs was released to theaters. The short is a mix of traditional animation and stop motion animation, relaying the history of popular music within the 20th century. The short was nominated for an Academy Award for Best Animated Short Film, but lost to The Hole by Storyboard Inc. and Brandon Films. The short was directed by Bill Justice, with story by Xavier Atencio. It stars the vocal talents of Paul Frees, Gloria Wood, Billy Storm, and Skip Farrell. The songs within the short were written by the Sherman Brothers, with musical arraignment by Camarata.

The short takes place inside Ludwig von Drake’s stately mansion, where he greets the audience at the door and brings them inside to talk about popular music. He begins with his life story at the beginning of the turn of the century where, inspired by his poverty and his ragged clothing, he created ragtime music. He then plays his hit song, “The Rutabaga Rag,” with some accompanying stop-motion animation of vegetables dancing. After this, he moves to the Roaring Twenties, where he was asked to come up with a new style of popular music to put Dixie on the map. He does so with the song “Charleston Charlie,” an allusion to popular ’20s singer Helen Kane. 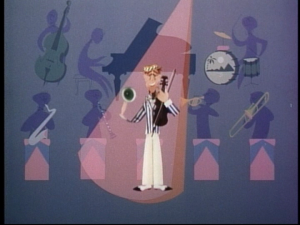 Ludwig moves to the Great Depression era of songs, and turns to a picture of a signer with a backing band

Moving to the Great Depression era, Ludwig has a bit of a panic when he talks about how he lost his money in the stock market. He bought a piano with his last nickel, and wrote the song “Although I Dropped $100,000.” The song parodies the popular songs of the time period, including “Let a Smile Be Your Umbrella” and “Stormy Weather.” Ludwig explains after this that he invented the microphone, and by doing so, invented the idea of a crooner. He wrote the love ballad “I’m Blue for You, Boo-Boo-Boo-Boo-Boo,” which has the singer imitating the crooning style of Bing Crosby. After this, Ludwig moved on to the style of Boogie Woogie, with three singers singing “The Boogie Woogie Bakery Man” which is allusion to the swing style, particularly the songs of the Andrews Sisters.

Ludwig then turns on the television to his favorite music show, The Von Drake Hour, which plays many of his hit songs. The song that starts to play is “Puppy Love is Here to Stay,” which is the beginning of the “modern era” of music (modern for the time the short was released). Soon, Ludwig turns off thetelevision and takes the audience into his hi-fi studio to play his final song, “Rock, Rumble, and Roar” which pays homage to the early rock and roll era in popular music. He forgot the record, and decides to play the song himself, which is segmented with snippets of all the earlier songs. The short ends with the house shaking and rocking along with the raucous music Ludwig is playing.