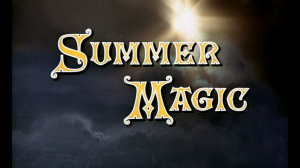 On July 7, 1963, the live action film Summer Magic was released to theaters. The film, based on the book Mother Carey’s Chickens by Kate Douglas Wiggins, is one of the earliest Disney musicals, with music written by Buddy Baker, and songs by the songwriting team the Sherman Brothers, with their song “Ugly Bug Ball” becoming a hit of the year. It was directed by James Neilson, and stars Hayley Mills as Nancy Carey, Burl Ives as Ossian Popham, Dorothy McGuire as Margaret Carey, Deborah Walley as Julia, Eddie Hodges as Gilly, Jimmy Mathers as Peter, Una Merkel as Mariah Popham, and Peter Brown as Tom Hamilton.

The film opens in Boston during the time of Ragtime music. Nancy Carey finds a letter in her front hall, and opens it excitedly, but then gets back to the sad task of packing her house with her brothers, Gilly and Peter. Their father had recently passed away, and the Careys are moving to a smaller house, as they can no longer afford their current residence. Their mother, Margaret, returns from their attorney’s office, with the unfortunate news that the mining stocks they’d counted on to help them are worthless, but she reassures them that they’ll get along fine, although they can’t afford to live in Boston. Nancy excitedly reveals to the family that she wrote the caretaker of a house they’d seen on vacation in Beulah, Maine. The caretaker will allow them to live in the house for $60 a year, and their mother agrees that they should go. 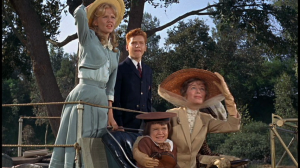 The Careys arriving at the Yellow House in Beulah

The Careys arrive at the “Yellow House,” as they affectionately call it, and meet the caretaker, Ossian Popham. After sorting out some of the “little white lies” in Nancy’s letter (calling her younger brother a “rickety baby,” for one), Mr. Popham allows them to stay and volunteers to help them fix up the house. The Careys soon become acclimated to the small town, with Gilly taking a job as Ossian’s assistant. Peter tries to fit in with the other boys, but is ridiculed and bullied for his Boston-style hair and clothes. Ossian helps Peter out by giving him some “country clothes,” and helps Nancy with all of the supplies she needs. Ossian’s wife, Mariah, is soon suspicious of Ossian’s behavior, and continues to ask if he has actually written the owner of the house, Mr. Hamilton, for permission to allow the Careys to stay there. Ossian continues to avoid her accusations.

The situation gets crazier for the Careys when Peter gets a job taking care of a sheepdog named Sam, who tears through the house and ruins all of Nancy’s wallpaper. Just as they decide that Sam can stay, they learn that another guest will be staying with the Careys: Cousin Julia. This revelation causes great distress for Nancy and Gilly especially, who dislike their cousin immensely for her spoiled attitude. After Julia’s father died, she was adopted by the Fergusons, who felt guilty for selling Julia’s father worthless stocks, the same stocks Nancy’s father invested in. The Fergusons can no longer afford to keep her (“Another unfortunate investment,” Margaret explains), and Margaret asks that Nancy and Gilly keep this a secret from Julia, as the news would devastate her.

Gilly (Lower Right) and Nancy (Upper Right) drive their cousin Julia to their house; Julia is rather unimpressed with the small town

When Julia arrives, Nancy and Gilly exaggerate every little detail and purposefully try to scare their cousin, pretending that bears will attack their house. After Julia has a good scare when Sam climbs through her bedroom window, Nancy and Gilly try to make peace with her, realizing their pranks may have gone a little too far. Meanwhile, as Margaret tries to face facts with the financials of their situation, Ossian tells them that a letter has arrived from Mr. Hamilton, saying that due to their renovations, he will let them live rent-free, providing they find a suitable place for his mother’s picture. They agree happily, and continue to work on the house. Julia, however, keeps her stuck-up airs and bests Nancy for the attention of the new schoolteacher, Mr. Bryant. Nancy is pushed to her breaking point, and finally tells Julia why she was sent to stay with them. Julia, heartbroken at first, realizes that she wishes to stay with Careys in Beulah, rather than return to the Fergusons, even though they are able to afford to keep her again. Nancy and Julia call a truce and become friends.

Nancy meets a handsome stranger at the house, unaware that she has just met Mr. Hamilton, the owner

The Careys are preparing for their housewarming party on Halloween when a strange man pulls up to the house. Nancy bumps into him and starts telling him the reason for the celebration and the mess the house was in before the Careys took over, unaware that the man she’s talking to is Mr. Hamilton. He soon leaves for town to see Ossian, demanding to know why the Careys are living there, and why Ossian never informed him of anything. Ossian gives Mr. Hamilton all the letters Nancy wrote him, hoping that he will be persuaded by them to let the Careys stay. That evening, as everyone attends the party with their dates, a lonely Nancy shuts herself in her room, refusing to attend alone. Her mother tries to convince her to meet her guests, with Nancy agreeing and putting on a brave face. As she makes her way down the stairs of the house, her shoe falls off and lands right in front of Mr. Hamilton, who has decided to show up with Ossian, and he escorts Nancy to the party. At the party, they unveil what they’ve been told is a picture of Mr. Hamilton’s mother, actually a grim-faced relative of Mariah Popham’s, leaving Mr. Hamilton rather angry. He makes his way over to Nancy, though, and won over by Nancy and her actions, continues to dance with her, an obvious romance blossoming between the two. The film ends with Ossian remarking that “the black cloud has a silver lining.