May 30, 1936 – The Mickey Mouse Short Thru the Mirror is Released to Theaters

On May 30, 1936, the Mickey Mouse short film Thru the Mirror was released to theaters. Although written as Thru the Mirror on its title card, the official poster for the short has the title spelled Through the Mirror. The short was based on the story Alice Through the Looking Glass by Lewis Carroll. It was directed by Dave Hand and stars Walt Disney as the voice of Mickey.

Mickey has fallen asleep reading Alice Through the Looking Glass, and his dream self gets out of bed to try to see if it’s possible for him to go through his own looking glass above his mantle. Finding that it is indeed possible, Mickey walks through the mirror, and looks in amazement at the mirror version of his own home. He jumps into his chair, startled that it is alive, and ends up stepping on the footstool, which has turned into a dog-like creature that bucks Mickey all around the room.

Just as Alice does in the story, Mickey shrinks after eating a piece of strange food

Mickey gets an even bigger shock when it seems that everything he bumps into has come to life. He spies a nutcracker cracking some walnuts, but is surprised to see that it disregards the nut and eats the shell. Mickey takes the walnut and eats it, which first causes him to grow to an alarming size before quickly shrinking to the size of a playing card.

A nearby phone begins to ring, and the phone tells Mickey it’s for him while helping him up to the desk. Their strange conversation ends with Mickey playing jump rope with the telephone cord. The radio, wishing to get involved, begins playing some upbeat music as Mickey begins to perform some tricks, before landing in an ashtray and procuring a top hat and matchstick “cane.” 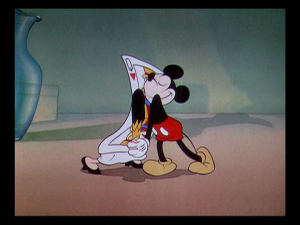 Mickey dances closely with the Queen of Hearts, which infuriates the King of Hearts

After Mickey tap dances on the top of a top hat, he is soon joined by a pair of gloves, and they begin a dance that sends Mickey flying into a deck of cards. He leads the cards into a march, which leads to them all dancing, Mickey with the Queen of Hearts. The Joker alerts the King of Hearts about Mickey’s close dancing with the Queen, and declares a duel with Mickey. Mickey grabs a nearby needle as his weapon, and begins to fight both halves of the King, sending him flying into an inkwell.

Angered by his defeat, the King calls out the cards to chase Mickey, and every single playing card in the place begins to chase the mouse. Mickey holds them off for a bit with an ink pen, but he runs out of ink and escapes through a sock. The cards take off their markings to throw at Mickey, and he gets the idea to blow them away with a nearby fan. Mickey ends up running on the top of a globe, before falling into one of the oceans, and getting thrown out by King Neptune.

Regaining his size quickly, Mickey runs back through the mirror and back into himself, who wakes up and thinks his alarm clock is his phone. He laughs and throws the clock into a drawer before rolling over and going back to sleep.

Posted in Uncategorized and tagged 1930s, Color, Mickey Mouse, Short film. Bookmark the permalink.
← May 29
May 31 →