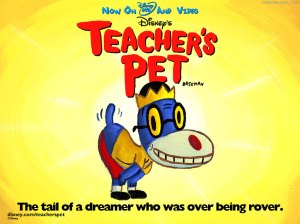 “I gotta be a boy! He’s so over just being Rover.”

On September 9, 2000, the first episode of the animated series Teacher’s Pet (also known as Disney’s Teacher’s Pet) premiered as a part of Disney’s “One Saturday Morning.” The series told the story of a talking dog, named Spot, who longs to attend school with his boy, Leonard Helperman, and disguises himself as a boy named Scott Leadready II. It stars Nathan Lane as Spot, Shaun Fleming as Leonard Helperman, Debra Jo Rupp as Mary Lou Helperman (Leonard’s mother and the teacher of Leonard and Scott’s fourth grade class), David Ogden Stiers as Jolly the Cat, and Jerry Stiller as Pretty Boy the Parrot. The series lasted for two seasons, with a total of 39 episodes. In 2004, a feature film version was released, with most of the cast reprising their roles.

The first episode, Muttamorphosis, tells the story of how Spot decides that he can’t take staying at home anymore, and decides to dress up in some of Leonard’s clothes and attend school. Spot, calling himself Scott Leadready II, shows himself to be extremely intelligent and apt at sports, which makes Leonard suspicious. Upon finding his dog’s secret, Leonard tells Spot to go home, but Spot/Scott proclaims that it is his destiny to attend school. Leonard keeps Spot’s secret, but secretly wishes that Spot would return home.

“Now the boy’s in school, he’s in training.”

On August 31, 1998, the Disney Channel Original Series Hercules: The Animated Series premiered with its first episode, “Hercules and the Apollo Mission.” The series was based on the 1997 film Hercules, and tells the story of a teenaged Hercules attending school. Most of the cast members from the original film reprised their roles in the series, with new characters Cassandra (Sandra Bernhard) and Icarus (French Stewart) playing the parts of Hercules’ school friends. Tate Donovan voiced Hercules, James Woods voiced Hades, and Robert Costanzo voiced Philoctetes. The show’s timeline makes it a midquel, with the events neither preceding nor following the timeline of the film. However, as many of the events of the series contradict events from the film, the show is not considered canon. It aired for 65 episodes, and finished its run on March 1, 1999.

The first episode, “Hercules and the Apollo Mission,” finds Hercules and his friends participating in an intern week at their school. Hercules is the only student not happy with his job, as he has to work at a fast food restaurant. He asks his father, Zeus, for help getting a better job, and Zeus grants him the job of driving Apollo’s chariot across the sky. Unfortunately, Pain and Panic are on hand to carry out Hades’ scheme to bring down Hercules, which includes unchaining the sun from the chariot. Hercules and Icarus must work together to bring the sun back into the sky before Hades is crowned the new king of Olympus.

“You’ve got to be kidding me, this is not a mall! Malls have stores and movie theaters and food courts! Not filthy animals bathing in their own drinking water!”

On August 21, 2004, the first four episodes of the Disney Channel Original Series Brandy & Mr. Whiskers premiered. The show was about a dog named Brandy Harrington (voiced by Kaley Cuoco) and a rabbit named Mr. Whiskers (voiced by Charlie Adler), and their adventures in the Amazon rainforest. Although their personalities are miles apart, the  two have to work together to survive in the rainforest, which is alien territory to them both. The show lasted only two seasons, and has not been released on DVD.

The first half of the pilot episode, “Mr. Whisker’s First Friend,” has Brandy and Mr. Whiskers meeting on an airplane flying over the Amazon rainforest.  When Brandy asks Mr. Whiskers to turn on the light so she can read a magazine, he accidentally pulls the emergency escape hatch in the cargo hold, and the two fall into the rainforest­. Brandy, angered by this turn of events, trades Mr. Whiskers for a map to help her escape, but in the end, she gets Mr. Whiskers back, and the two build a treehouse. The second half, “The Babysitter’s Flub,” finds Brandy and Mr. Whiskers babysitting Mama Crock’s eggs. The other episodes shown were “Cyranosaurus Rex/To The Moon, Whiskers,” “Lack of Brains vs. Brawns/The No Sleep Over,” and “The Fashion Fascist/Happy Birthdays.”