August 24, 2014 – Newsies Has its Final Performance on Broadway

“From our first performance, we have been humbled by the spontaneous and genuine outpouring of affection from fans and the theatre community alike.” – President and Producer for Disney Theatrical Productions Thomas Schumacher

On August 24, 2014, the Broadway musical Newsies had its final performance, capping a successful two and a half year run with  1,004 performances. The show was profitable for Disney, recouping its $5 million investment in the first seven months of the show’s run; Disney had a strong need to recover after the disappointments of Tarzan and The Little Mermaid, and went on to win two Tony Awards: Best Score and Best Choreography. Although the Broadway show came to an end, the national tour would launch later that year in October. At the production’s end, the show featured Corey Cott as Jack Kelly, John Dossett as Joseph Pulitzer, Liana Hunt as Katherine Plumber, Ben Fankhauser as Davey, Chapathia Jenkins as Medda, Andy Richardson as Crutchie, and Luca Padovan and Zachary Unger as alternating actors for Les.

November 5, 2001 – The Final Episode of the Animated Series Recess Airs

“You know what, guys? Here we are talking about how much we need T.J., when the fact is, I think right now, T.J. needs us.”

On November 5, 2001, the 65th and final episode of the animated series Recess aired in syndication. Although a popular series, at the time, Disney had a 65-episode rule with its animated series, effectively canceling the series. It was one of the longest running shows on Disney Saturday morning programming block. The final episode was comprised of two segments: Mundy, Mundy and Lost Leader. It starred Andy Lawrence as T.J., Ricky D’Shon Collins as Vince, Pamela Segall as Spinelli, Jason Davis as Mikey, Ashely Johnson as Gretchen, Courtland Mead as Gus, April Winchell as Miss Finster, and Dabney Coleman as Principal Prickly.

Mundy, Mundy begins with T.J. commenting that the bully Mundy and his cronies are charging kids to play in an area of the playground known as the “Cheese Box.” As Vince kicks the ball in kickball, it ends up nearly hitting a kindergartener, until Mundy catches the ball and saves her. His friends tell him to move before the word spreads that he did something nice. T.J. and his friends, however, see the whole thing, and word spreads like wildfire. Suddenly, everyone thinks he’s a hero and a saint, and they follow him around the playground. His friends threaten T.J. and his gang unless they ruin Mundy’s reputation once again. Gus then pretends to have been gravely injured by, in the hopes that everyone will turn their backs on the former bully. Unfortunately, the plan backfires, and the kids continue to follow Mundy around. Wherever Mundy goes, although he tries to bully other people, he’s seen as a great guy. T.J. has to go to Plan B, and they ask Mundy’s friends for all of the horrible things that Mundy has done through his life. The gang then prints a newspaper detailing all of his misdeeds, but it only turns the playground against T.J. and his friends, rather than against Mundy. T.J. then gets an idea for Mundy to be seen doing a misdeed, and Mundy is given a bat to destroy the Cheese Box. Mundy chickens out at the last minute, unable to destroy the Cheese Box after all. Mundy is now a reformed individual, and he thanks T.J. for his help.

In Lost Leader, T.J. is the leader of a mission to retrieve the gang’s lucky bat, being held hostage by the Ashleys. Although seemingly well executed, the plan falls apart, as is the Ashleys’ clubhouse. The whole gang is given a week’s detention. T.J. is dejected, as he believes his plans keep falling apart, and he decides to give up planning for good. After his declaration, Lawson challenges T.J. and the gang to a baseball game, but T.J. still refuses to come up with a plan, still wallowing in his failures. The gang attempts to come up with plans individually and compare, but the gang can’t even agree on how to run a meeting. Gretchen’s plan is to come up with robot versions of the Ashleys, Gus suggests they use his dad and his army contacts, Mikey wants to throw the Ashleys a picnic, Spinelli isn’t sure her plan is legal, and Vince refuses to share his plan. The gang realizes that T.J. needs them more than they need him, and decide to work to make T.J. less angry at himself. The group pretends to come up with a plan that won’t involve him. T.J. confronts Gretchen, angered that they called him out as a bad leader, and takes over the plan completely. Once T.J. takes over again, the gang is able to retrieve the lucky bat, and admit to T.J. that their horrible plan was a ruse to get him back in the game again. The gang wins the game against Lawson, and the episode ends with T.J. coming up with another plan.

“Remember, you promised each other not to let the competition come between you.”

On January 6, 2012, the final episode of the popular Disney Channel Original Series Wizards of Waverly Place, entitled “Who Will Be the Family Wizard?” aired. On its premiere, the finale averaged almost 10 million viewers, becoming the most-watched series finale in Disney Channel history; the final season was also awarded the Emmy for Outstanding Children’s Program at the 64th Primetime Emmys. The series was created by Todd J. Greenwald, and starred Selena Gomez as Alex Russo, David Henrie as Justin Russo, Jake T. Austin as Max Russo, David DeLuise as Jerry Russo, Maria Canals Barrera as Theresa Russo, and Ian Abercrombie as Professor Crumbs.

The episode begins with Alex cooking dinner for her family, when Professor Crumbs arrives. He informs them that since Alex performed a selfless act without using magic (making dinner), the family is then able to begin the Family Wizard Competition. The competition is set up in a game show format, with Alex, Justin, and Max competing to see which sibling will keep their magic powers, with the other two becoming mortal. Their father Jerry makes the siblings promise that they won’t let the competition get the best of them. Their mother Theresa thinks that Justin will win, but Jerry believes Alex will come out the winner. 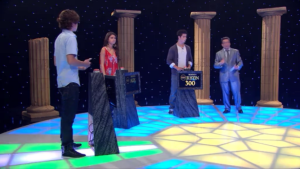 The Russo Family competition is set up like a television game show, with Justin taking an early lead

The competition begins, with Justin showing a strong lead. He is further encouraged by the arrival of his girlfriend Juliet, as is Alex by the appearance of her boyfriend Mason. While watching the game from home, Alex and Justin’s friends Harper and Zeke are poking around the magical items in the home, when Zeke inhales something that makes him turn purple. The two appear at the game asking for help, when the griffin that Alex is trying to get a feather from breaks free and kidnaps Harper and Zeke. After being convinced by Alex, the three siblings use their time outs to go save their friends, but must return within 45 minutes, or be disqualified.  They find Harper and Zeke in the griffin’s nest, but the griffin finds them and attacks. After defeating the griffin, they hurry back to the competition, only to find that they ran out of time and are all disqualified, and all three have lost their powers. Justin and Max are furious at Alex, blaming her for their disqualification and complete loss of their magical powers. Jerry tries to keep the family together, but comes to the conclusion that since the family is ruined, he will sell the family sandwich shop.

The kids decide to at least try to work together to save the sandwich store for their father, with Max and Alex able to work together, and Justin slowly beginning to forgive Alex. Jerry is surprised, but pleased, to see the family bond is as strong as ever. Just as they are ready to move on with their lives, they are drawn back to the competition, discovering that the loss of their powers was just round two of the test. Round three begins, with Alex finally making it on the board and winning the round. The final round puts the three siblings in a labyrinth, where they must use their powers to get through, with the first one to get out becoming the Russo Family Wizard. The first person out is Justin, and although he is excited to win, he suddenly claims he can’t accept it. He explains that when they were in the maze, he got caught in a tree root near the finish line, and while Alex was about to be the first to exit, she comes back to help her brother. He then tells Alex that she deserves it. After Alex is declared the Russo Family Wizard, Professor Crumb tells Justin that he will be retiring from Wiz-Tech, with Justin taking his place and becoming a full wizard. Max is then given the family sandwich shop, and the show ends with Alex stating that the family is finally happy all at the same time.