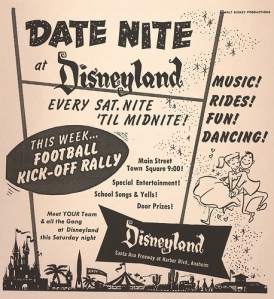 On June 28, 1957, the first Date Nite in Disneyland event was held in the Carnation Plaza Gardens. The park’s hours were extended until 1 AM on Fridays and Saturdays during the summer season, and couples would come in to dance the night away with some of the best names in entertainment. Several bands were invited to play in sections of the park, including The Elliott Brothers, who headlined at the Plaza Gardens. The Golden Horseshoe Saloon was also featured as a venue for dancing, as was the Space Bar in Tomorrowland. In 1958, an album by the Elliot Brothers called “Date Night at Disneyland,” which featured recordings of the band playing popular songs of the time that would have been played during the event, including a track called “Let’s Dance at Disneyland.”

March 14, 2010 – Tiana from The Princess and the Frog is Inducted into the Disney Princess Royal Court 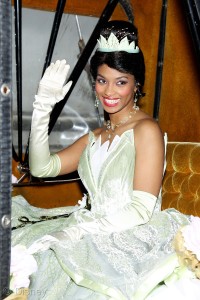 “We’re thrilled to recognize Princess Tiana and officially announce that she is here to stay as a full-fledged Disney Princess. Little girls quickly embraced her independent, strong-willed character and the rich storyline of The Princess and the Frog.” – Sheila Ullery, Disney Consumer Products.

On March 14, 2010, Princess Tiana’s official induction into the Disney Princess Line took place in Manhattan’s New York Palace. Joined by the other eight members of the line, Tiana arrived in a horse and carriage down Madison Avenue, with many celebrities —  including Audra McDonald, Melissa Joan Hart, Nigel Barker, and Alessandra Ambrosio – and their children waiting to meet her. Anika Noni Rose, the voice of Tiana in The Princess and the Frog, was also there. Once reaching New York Palace, Tiana walked down the processional aisle flanked by fanfare trumpeters to the ceremony stage, where the other princesses greeted her. A royal proclamation of Tiana’s status was read, and she was then crowned by Prince Naveen. This ceremony aligned with the March 16th release of the animated film on Blu-Ray and DVD, and presented the upcoming line of Tiana-themed toys, costumes, and other merchandise. The character has proven to be highly popular, with many products featuring the character becoming either top-sellers or selling out completely.