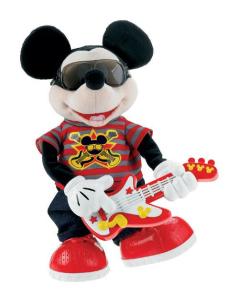 “It’s great to see how Rock Star Mickey can get kids rockin’ at an early age.” – Constantine Maroulis

On August 19, 2011, representatives from Fisher-Price and Disney Consumer Products, along with former American Idol finalist Constantine Maroulis, and Mickey Mouse, were on hand at the D23 Expo to present the new Rock Star Mickey interactive plush toy. The toy, a sequel to the previous year’s Dance Star Mickey, features Mickey performing specialty rock moves, including the “Mickety-Split,” where he performs a split while playing the guitar with his nose. Mickey also performs a version of the classic rock song “You Really Got Me.” It was also announced at the event that the toy would be available at retailers nationwide starting September 6, and would retail for $54.99. Maroulis entertained crowds and performed with Mickey to promote the toy, while representatives showed the toy’s dance moves and answered questions.