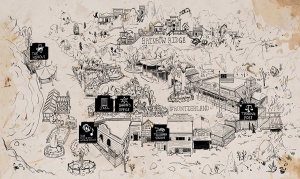 “It’s time to choose your alliance in the fight for Frontierland!”

On September 27, 2014, the interactive park activity Legends of Frontierland: Gold Rush! ended its run in Disneyland. Open since July 9, 2014, the game was similar to the interactive experiences in Walt Disney World (such as Sorcerers of the Magic Kingdom), which gave guests a chance to enter a story set in the Frontierland area of Disneyland; guests could choose to either be a lawful citizen, or an outlaw, and earn “bits” to help them influence and further the story.