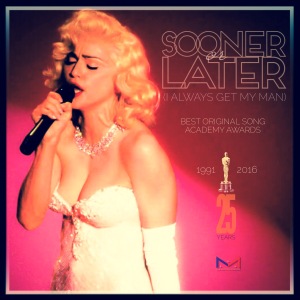 “Baby, you’re mine on a platter, I always get my man.”

On March 25, 1991, the 63rd Academy Awards were held at the Shrine Auditorium in Los Angeles, California. At this ceremony, the Touchstone Pictures film Dick Tracey, nominated for seven awards, walked away with three: Best Original Song for ”Sooner or Later (I Always Get My Man),” awarded to Stephen Sondheim; Best Art Direction, awarded to Richard Sylbert for Art Direction and Rick Simpson for Set Direction; and Best Makeup for John Caglione Jr. and Doug Drexler.