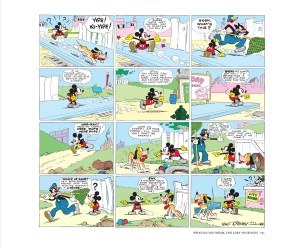 “Here’s something you’ve never seen before – something new under the old overworked sun – MICKEY MOUSE in a full page color comic!”

On January 10, 1932, the first color Sunday comic of the Miceky Mouse series premiered in newspapers across the United States. The Mickey Mouse comics burst on the scene on January 13, 1930, and became a smash hit almost overnight. The comic syndicate King Features had been eager to feature a full-page color comic, but artist Floyd Gottfredson and inker Earl Duvall hadn’t had the time to devote to such an ambitious undertaking. Once Gottfredson and Duvall had Al Taliaferro and Ted Osborne on their team, the team then had time to bring the color comic to fruition. The appeal of the color comics is interesting to note, as at that time, Mickey’s appearance on the silver screen was still black and white (Mickey’s first color cartoon wouldn’t be until 1935’s The Band Concert). The first color comic was done by completely by Duvall, trying to mimic the slapstick that had worked so well in the short films; Gottfredson would take over soon after. The pair were able to create a new kind of gag strip storytelling through their adaptation of Mickey Mouse short films and the creation of new stories.