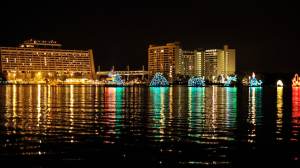 On October 26, 1971, the Electrical Water Pageant began its run on Bay Lake and the Seven Seas Lagoon in Walt Disney World. The precursor to the Main Street Electrical Parade (which opened in 1972), this parade featured a variety of floating structures against the illuminated background of the Contemporary Resort, with the lights blinking in time to synthesizer music. The floats were usually in the shape of aquatic figures, such as whales and dolphins. As of 2018, the pageant is still in operation at Walt Disney World.