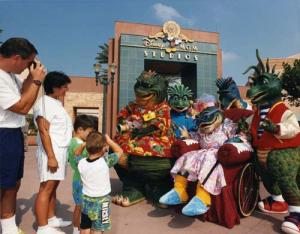 On August 29, 1992, the Disney-MGM Studios parade and show Dinosaurs Live! ended its run. Opening on September 26, 1991, the parade featured the cast of the ABC series Dinosaurs as the “Surprise Family of the Day.” The song for the parade was a rendition of the 1988 song “Walk the Dinosaur,” originally by Was (Not Was). The parade was considered the beginning of adding the characters from the show into a larger presence within Disney-MGM Studios, but after falling ratings, these plans were cancelled. After Dinosaurs Live! ended its run, it was followed by Aladdin’s Royal Caravan.