July 7, 2006 – The Pirates of the Caribbean Attraction Reopens 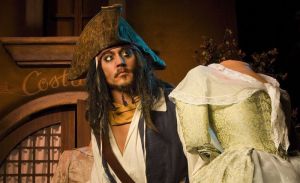 “Drink up me hearties, yo ho.”

On July 7, 2006, the popular attraction Pirates of the Caribbean reopened after an extensive refurbishment that added an audio-animatronic figures of the character Jack Sparrow from the franchise of the same name. The reopening of the attraction coincided with the release of the second film in the series, Pirates of the Caribbean: Dead Man’s Chest. Jack Sparrow appears in a few scenes within the attraction, including hiding behind a dressmaker’s dummy, peering out of a barrel, and celebrating his good fortune after finding and collecting treasure.