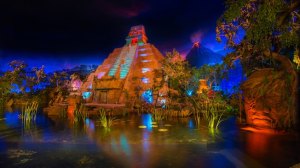 “Take in the sights of Mexico and the antics of the 3 feathered amigos on this gentle boat ride through the Mexico Pavilion.”

On April 6, 2007, the dark ride attraction Gran Fiesta Tour Starring the Three Caballeros opened in the Mexico Pavilion of Walt Disney World’s Epcot park. This attraction replaced the El Río del Tiempo attraction. Featuring Donald Duck, José Carioca, and Panchito from the feature films Saludos Amigos and The Three Caballeros, this ride takes guests through the sights of Mexico as Panchito and José search for their missing friend, Donald.