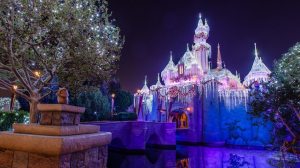 “Step into a storybook.”

On November 26, 2008, the walking attraction Sleeping Beauty Castle Walkthrough reopened in Disneyland. The walkthrough was originally opened on April 29, 1957; it was expanded in 1968 and redesigned in 1977, before being closed again for refurbishment in 2008. In 1977, the attraction was designed to resemble the figures shown in the Main Street dioramas, but in 2008, it was decided that the attraction would go back to the version resembling Eyvind Earles’s designs for the animated film, along with some technical modifications. A brand new addition was the CGI walkthrough for those guests who were unable to climb stairs but wanted to walk through virtually.