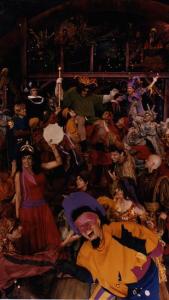 “A cast of medieval puppets and 21 live performers tell the story of the bell ringer Quasimodo in Disney’s The Hunchback of Notre Dame: A Musical Adventure at Disney-MGM Studios.”

On June 21, 1996, the stage show Hunchback of Notre Dame – A Musical Adventure opened at the Backstage Theater in Disney-MGM Studios (now Hollywood Studios) at Walt Disney World. Based on the animated feature film The Hunchback of Notre Dame, the show promoted the film and was part of Walt Disney World’s 25th anniversary celebrations. The show closed its run on September 28, 2002.